What Is In A Name Part 3: Japheth The Principle Of The First Son

In our society especially if you are an American and even world wide, one will find a certain level of obsession with beauty.  One can scarcely happen upon a news web page or walk by magazines in the grocery store without there being some issue about beauty--who looks hot? who looks hot after pregnancy? what star slayed this red carpet event with her beauty? etc.  There are beauty pageants held every year of women from all around the world.  There is the Miss America, Miss USA, Miss Universe and so forth.  The world loves to extoll and exalt the physical attributes of beauty.  Arguably, one can surmise that if you are considered beautiful your path in life may be gallons easier than those who are not considered so.

In the US. one need look no further than the phenomenon of the Kardashians-A group of sisters catapulted to fame based on little next to nothing but beauty and for one a sex tape.  But what is amazing about these beautiful white women with their unusual prominent buttocks is that they have a hankering for Black men. In any event, there is hardly a day goes by that the average citizen is not assailed by their appearance and what happens in their day to day life. Another example of the privilege of considered beauty is Beyoncé famed singer and recent center of Super Bowl 50 controversy.  With her ever flowing blond locks and caramel skin, the average blow joe can scarcely go a day without being assailed by her visage and the day to day happenings of her life.  I am almost positive she has stock in yahoo and other media outlets.  The other popular Black fashion singing icon is Rhianna.  She pops up a lot but is running a few legs behind Beyoncé and the Kardashians.  She too is admired for her favorable looks which tend be mulatto like along with Beyoncé.  It is a bit beyond weird that no other Black singer who is just Black and talented can seem to crack the veil of constant media exposure and pedestal adoration as these two women.

I would hazard to say that if Aretha Franklin, Gladys Knight, Roberta Flack or any other phenotypically Black American woman tried to reach fame and stardom with just their beautiful voices in today's singing world, they would likely flame out due to their appearance.  Why is this? Because my dear friends in this segment of the age today we live under the heavy Japhetic spirit of beauty.  It envelopes the world like a well cast spell so that when little girls of color particularly Black girls and boys see what images are adored most and treated respectfully it is the one of Japheth or (Yapheth).  It is the principle of the first sons.  What is the Principle of the first sons? It is the Principle of Beauty as is indicated by Yapheth's name.  It is associated with the Hebrew concept of ruddy (reddish-brown) and the word Yapheh which according to Strong's concordance means beautiful, handsome, fair (not as in white/albino). It is how I know that Yapheth is the first born and not second as some have suggested.  This principle runs throughout the human experience.  I have noticed that in families of more than one sibling, it is most common that the first born is the most attractive be they boys or girls.  It was so in my family.

This same principle is repeated in the story of King Saul and King David.  In my little book The Principle Of The Second (The Age To Come) I use Saul and David as an example of the Principle, but what is not readily noticeable is that when God chose a king for Israel the first time he did it on the basis of human criteria.  Saul was noted for being tall and handsome kind of like a Cam Newton.  When he chose David he did so based on his heart toward him as opposed to looks.  What I never  stated in that thesis was that King Saul and David represented the cosmic reality of the beauty of the first sons in heavily places that Lucifer was of the utmost depiction and their replacement with sons who cannot compare to them in beauty but are sons of substance and the heart of God.  It is also repeated in the account of Esau and Jacob.  Although, they were twins, they are fraternal twins and with Esau being the same ruddy color his beauty can be inferred.

Also, it is well known that on the African continent many Ethiopian and Somali women are considered beautiful and used as models. If anyone has ever ventured onto a Somali run video or blog they will notice their fascination with their beauty to be contrasted to that of Bantu people.  They generally abhor the thought of being associated with the Bantu. Interestingly, a blogger on nairaland.com makes the point of highlighting the role of Ethiopians and Somali in the eastern half of the slave trade of the continent of Africa of Bantu and Nilotic tribes and how they are still the enemies of these people.  If we establish that they are Edom then it is no surprise when Jerusalem fell in 70ad, Edom everywhere probably rejoiced and would be no friend of Jacob in his movements through Africa. Even if they (Ethiopians and Somali) know not who they are, the blood never forgets.

Finally, the principle of the first sons is seen in Jesus (Yeshua) as the second Adam in contrast to the first Adam. Isaiah 53:2-3 states, "For He shall grow up before Him as a tender plant, And as a root out of dry ground. He has no form of comeliness; He is despised and rejected by men, A man of sorrows and acquainted with grief. And we hid, as it were our faces from Him; He was despised and we did not esteem Him."  What this passage reveals is that like Yapheth the first Adam was Adom ruddy in the comely sense.  Whereas Jesus in todays' vernacular was basically plain or average maybe not even attractive.  He would assuredly never be a matinee idol and would be as far from the Japhetic presentations of Christ that deluge Hollywood cinema as the earth is 93million miles away from the sun.  What is more telling in knowing who the true sons of Israel are is that just as they despised and rejected him for his lack of comeliness and did not esteem him so are Black people across the diaspora in and off Africa are despised and rejected of men and held in no esteem for our lack of Japhetic/Edomic comeliness so much so that the masses and even ourselves are more comfortable with seeing our likeness disappear in Japhetic dilution with mixed marriages or cohabitations that our offspring may obtain the Japhetic beauty standard.

Am I saying all interracial unions are motivated by the desire for mixed race Japhetically beautiful children. No I am not.  I'm only observing through media, history and anecdotal accounts in today's world of the pressure on Black people to marry interracially not so much out of love at times as out of at least for Black women not being white Japhetic women and not having a large pool of successful Black men who will pick them as mates.  To illustrate my point, I ran across an article on the Root.com titled "Why Successful Black Men In Brazil Won't Marry Black Women."  The article in citing the book Race In Another America: The significance of skin color in another Brazil reveals that in 5 out of 6 marriages the Black spouse has the superior socioeconomic status so that what is suggested is that when Black people intermarry with white people, they are exchanging their inferior race and superior socioeconomic status with a white person of lessor status.  The data suggest that Black women have the least value and options and spend the least time married.  Another author cited by the article implied that marriage between black men and white women is becoming the rule rather than the exception.

In another account the article cites the story of a young black man who is upper middle class in Brazil and decided to exclusively date and marry black women his background of his mother being a maid factoring into his decision.  What is intriguing about his relationship with his black girlfriend is that he receives stares from people who are not used to seeing all black couples in nice places where they are filled with white and mixed couples. Baltar states, " My conclusion is that the problem in their minds is that black families offend them.  I don't know why. I don't see the same reaction to interracial couples."  By the way this phenomenon is being duplicated in the US. One only has to look at Hollywood and sports.

I can tell Mr. Baltar why Black families offend them if he is correct in his assessment.  Whether they know it or not Black families offend the Japhetic oriented masses not because they are Black in skin color but because of who they are.  The spirit that longs for the disappearance of the Black phenotype is the spirit of the errant heavenly first sons. As long as Black people of the line of Israel is present on the earth they represent the pending threat to their usurpation in heavenly places and the end of the Japhetic age. Can you really have an Israel if by heavy interracial marriage they become Japhetic in appearance.  What would be the point?  The last thing people who have been historic enemies of the chosen people of God want is to see them as the focal point of rule and governance on earth as the priest of God.  The thought of a people they esteem not in beauty as being the ones God chose rankles to the core and that is why the greatest magic trick of this age and one in which the magicians of Egypt and Babylon would applaud is the use of witch glamor through media to conceal the true identity of the Israel of Jesus' time.  What is glamor? It is the creation of an illusion.  What is false appears as true and what is true is not seen by the naked eye. The magicians of Egypt and Babylon in days past would not be able to restrain from rendering a vigorous round of applause at the ability of white Japheth and his fellow cohort Esau to trick the world into making them think the ancient Hebrews were albino (white) sons of Yapheth.  What Is In A Name? Everything my dear friends everything.

This is the Jesus which makes the world comfortable.  A great delusion. 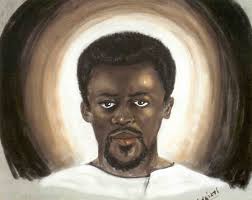 This Jesus would give the world a fit. But highly more accurate.
I don't think the real Yeshua was even this good looking from some
descriptions I have read.
Posted by Cheree Bartlett at 6:03 PM