The New World Order, The Movie Get Out and The Issue of Black Women

There is laid up for me a crown of righteousness which the Lord the
righteous judge will give to me on that Day,
and not to me only but also to all who have loved
His appearing (2 Timothy 4:7)
Good day all! One thing I will say about the world, it is never a dull place. It is an often annoying place but never really dull.  Since my last article, I have been pleasantly surprised to find two other  Black Christian pastors whom God has dropped the scales from their eyes as to their identity and of those of Afro-Americans and others of the diaspora.  I have posted several videos below of one them Pastor Stephen Darby.  He is a good speaker and broaches topics that I have not seen a Black Christian pastor talk about at least on the net. There may be others but I have not run across them yet.  Most importantly, he seems to know who Jesus is from a relationship standpoint and the value of being born again of the spirit.  The merging of these two positions is integral to the closing of this age. In this article I am going to address The New World Order, the movie Get Out and the issue of Black women. Thus, it will likely be a fairly long one and so I ask for the patience of the reader.
The New Word Order
﻿
﻿
﻿Any one who has been around for any significant time and has not been tuned out due to the cares of this world has probably heard the term "New World Order".  I posted a video of Pastor Darby doing a sermon on it because whenever most people talk about the New World Order, it is within a prophetic context mainly of the biblical kind.  Most people see it as a cabal of elite people who want to bring about this globalist agenda in order to usher in the anti-Christ figure and dominate the world with the implementations of various evil schemes.  People on the web call it various names such as the illuminati run by Khazarian Jews who we know as the Askenazim who occupy the physical land of historical Israel and who the world believes especially gentile and true natural Israel Christians are the Jews of Abraham, Isaac and Jacob.  They are seen as trying to bring about a one world government no doubt with themselves at the head and thus Satan's or Lucifer's entry and reign so to speak thru this anti-Christ figure.
I have no doubt that there is an agenda a foot to mold the world into a place that is increasingly hostile to God and Jesus and the values that they exemplify. One has only to observe popular culture and people today and know the invisible hands so to speak have been steadily at work; however, what most people get wrong because true Israel has been hidden is that whomever it is out there pulling the strings of the world is not trying to usher in the Satanic rule of the anti-Christ.  One has only to look at their movies and realize that they desperately want to prevent that and any movie which has an apocalyptic theme is always about preventing Satanic forces from so-called coming in and destroying the world.  Except, here is the catch.  The world is upside down as we now live in it.  The Black Christ has been replaced with a White Christ and saints and Black Israel has been replaced with White Israel.  Therefore, Satan in their world is really Jesus and he is the one who they are always endeavoring to prevent from returning. He is the destroyer to them. He is Moloch to them and they need the aid of demonic power of the real Lucifer to assure their position and his.  I can assure you that if they actually talked to Satan, the real one he would be like "Nope, I'm not trying to come to earth and usher in your new world order." "I need you to keep the façade of being true Israel and doing whatever you can to extinguish the real Israel and Judah so that I don't find myself here." That way you can stay rulers of this world and so can I."

I used to wonder why it was that Jesus disarmed principalities and powers, making a public spectacle of them, triumphing over them in it (Col: 2:15) but never removed them.  Why leave them in their place to be a pain in the butt to mankind.  One reason I surmised is because Jesus was building his church, His spiritual Israel and the time had not come to remove them.  The other reason is just as he left enemies in natural Israel for them to contend with and be tested by He left the spiritual enemies of the spiritual Israel for their testing and growth as well.  Therefore, mainstream Christendom will always get prophetic events wrong because not only do they look at the wrong Israel as a gauge but they look at outside events and world happenings whether it be wars, and rumors thereof, natural disasters, the machinations of the elite globalist and etc. for indications of the end-time wrap up.  When Elijah fled into the wilderness, God told him to stand on a mountain before the Lord and the Lord passed by as a strong wind, earthquake, and fire and after the fire a still small voice. It was the still small voice that Elijah responded to.  What is the message? God was not in any of the dramatic events, but in a still small voice. (I Kings:19).

Thus, just as God was not in the dramatic events Elijah witnessed, He is not necessarily in the dramatic events of our day as prophetic signals.  Contrary, to the belief of some, we are not in the events of Revelation. What the elites know or may not know and that the world surely doesn't know is that the only people who can initiate what for them is the apocalypse is natural by lineage and spiritual Israel combined, those born again believers who have loved his appearing. We are surely getting closer to that time. In my little book Principle Of The Second (The Age To Come), I make reference to the prohibition by God in Deuteronomy 22:11 of mixing two different animals and textiles together that being an ox and a donkey not plowing together and wearing mixed material of wool and linen. I analogize this non-mixing to natural and spiritual Israel to that of spiritual wickedness in heavenly places.  You cannot have a restored natural Israel on earth with those same errant powers of the air still in their place.  They are two different types of material.  Therefore, that is why the supposed return of Black Jews to  Israel from Ethiopia or the African Hebrew Israelites is not the authentic return of Israel because we are still in this age and Japheth is still in Shem's tent and principalities and powers have gone nowhere. 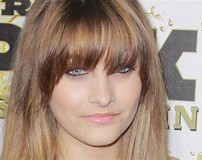 Paris Jackson. Daughter of Michael Jackson.  This is not a Black person.  A valid example of fruit loops as she is Japhetic. Honestly, I was never convinced those were his natural kids but if so consider the phenotype that made Michael distinctive gone.  I think most all the Jackson progeny are White or near White now.  Kathryn Jackson's descendants will have to dig in archives to find their nearest all Black relatives.
Muhammad Ali's grandson. No longer recognizably Judah. Ali's strength and genetics will live on in White men (Japheth).  Interestingly, He was potentially my father. My mother was pretty back in the day and still is and when they met He wanted according to her to get together but  she being newly married already and my grandmother being forever practical told her she didn't want to be doing the muslim thing.

Ashley Simpson and Evan Ross, son of Diana Rose and late European husband.  He was already a mulatto married Ashley and the baby is white.  Diana Ross descendants are no longer Judah but have been replaced and as can be seen iron and clay do not mix to produce the same substance.  A bowl of fruit loops will not get the job done.
﻿
﻿
﻿
﻿
﻿
﻿

Posted by Cheree Bartlett at 5:22 PM