I can think of no place currently that exemplifies this duality more than the United States (US).  Anyone who has read my articles on this site knows that I consider the US to be a type of symbolic Babylon as well as Egypt.  It seemingly inherited the sceptor of these two nations from spiritual standpoint in terms of the magic and sorcery it wields. What do I mean by this?  When one looks at the US from the outside, he may think this place is a hub of rationality and logic which has allowed them to achieve the technological advances and lifestyle many of its citizen enjoy.  Some of that may be true, but when you look deeper or just be observant of societal changes you understand that technology is just a vehicle for the wizards/sorcerers and witches to do their magic.

What is their main medium for shaping society in the way they want it to go?  It is of course television via all types of programs and movies and these days even the internet.  They are experts at manufacturing non-existent realities and causing societal havoc and mayhem.  For instance, the homosexuality issue.  There was a time when homosexuality was not an issue in  the US.  I don’t mean there were not individuals who practiced homosexuality because nothing is new under the sun.   I just mean there was not some overwhelming persecution of homosexuals such as folks stoning them to death in streets or what not.  I would hazard to say, there weren’t many homosexuals as a percentage of the population to begin with.


Since the wizards of Babylon needed to steer society away from biblical morality, they concocted the fantasy of homosexual oppression so that they were comparing it to the status of Black Americans with regards to the civil rights movement.  But again when you walk outside your house and live everyday life none of that is going on.  It was only happening on news shows as topics of discussion and later in Hollywood the primary distributor of Babylon’s magical influence and then they target their favorite group of people school children.  The next thing you know as an average individual trying to make a living and get your children an education, they are being exposed to homosexual issues before they can barely tie their shoes so that now you have them being proselytized into the notion of homosexual oppression so that once they grow up they are now ready to approve via law the redefining of the traditional meaning of marriage and woe to anyone who disagrees.


Their latest magical project and the steering of society in the image of the wicked one is transgenders, what use to be called drag queens for men-that is men who dress up like women or these days that is not enough it is men, boys, girls and women who may think they are another gender being given the stamp of validation on thought alone.  Once again, the wizards of Babylon manufactured an oppression or discrimination of transgender people.  How did they do it? They did it with bathrooms ladies and gentlemen. Yes, it became an issue around 2015 as to whether transgender men can use women’s restrooms in public facilities.


Immediately, law makers were scrambling to pass laws against this notion which caused a non-issue to receive media attention in which the media as part of the coven of sorcerers who really run the US are obliged to frame the issue as one of discrimination and oppression of a minority group.  Then the sorcerers who run the school systems immediately put into place policies making sure Little Johnny can use the girl’s restroom if he feels like he is a girl instead of a boy.  Oh, as a teacher you come to work one day and you can’t call a girl by the pronoun her if she thinks she’s a boy or you will be fired when the day before it was okay.  Next Hollywood sends out its top witches/sorcerer celebrities or patsies such as Bruce Jenner who now goes by Caitlin Jenner and Celine Dion with her line of gender confusion clothing to make sure they validate the cause and of course television programs and movies featuring transgender males.


For whatever reason, it always Black men who end of being the face of these movements.  It’s not Asian men (Chinese or Indian) or Hispanic men of mestizo/ native heritage.  Nope it is always Black people some way or how.  It like we are always starved for attention and don’t care how we get it. Judah is always made to look especially unworthy of their calling.  I really wish Black people would disappear from Hollywood.  They always manage to just look like an asinine tool for whatever is the current agenda.  Once again as with the homosexual issue, they must pass laws protecting and validating transgender confusion with corporations ready to fall in line with the agenda like well manipulated puppets.  But when you go outside and live everyday life like going to a restaurant, you don’t see any of what the magical wizards of Babylon is saying is a reality a reality.  I do not see adult men of any number ever trying to use the women’s restroom or vice versa.  But again the objective is really the children because you always need recruits for the agenda of the wicked one.  I believe this picture illustrates it quite well: 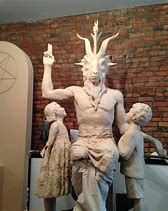 So, just as in the movie the Wiz which featured an all Black cast, you had a television camera located around the people of Oz who at the wizard’s command they changed the color of their clothing to whatever he wanted at the drop of a hat, you have society who at the wizards of the US command change to whatever they want via the visual media of television and movies.  I think that was another theme in the readapted Wiz.


The other  foundational and main spiritual character of the US is that of Christianity which for all intended purposes has represented the kingdom of heaven and the main source of light in the country. It has of course constantly been mocked, harassed and denigrated by the weeds of the wicked one, but because mainstream Anglo-Saxon Christian evangelicals has considered the country a Christian one, it generally fails to see the true operating forces of the sorcerer weeds who with top notch Egyptian like magic make those things which are not as though they were, who make non-realities into reality and thus govern in the opposite of the biblical foundations of law and instead in accordance with the perverted perception of law of the wicked one.  I will continue this examination into duality in the next possible two articles.